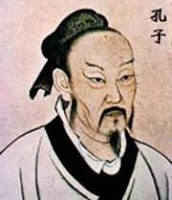 From the Annals of Lu Buwei (呂氏春秋 A classic Chinese history book), there was a record about Confucius 孔子 and his disciple Yan Hui 顏回.

When Confucius was traveling in the area of Chen 陳國 and Cai 蔡國, two of the twelve nations in China at that period of time. He had encountered some difficulty in getting food to eat. The record said that in Confucius’ broth of greens, it contained not even a grain of rice. For seven days Confucius did not taste any grain, so even during daylight he had to lie down. His disciple, Yan Hui, went out and sought for some rice. Fortunately, he was able to obtain it, and prepared it.

While cooking the food, Confucius observed that Yan Hui reached for something inside the pot and ate it. He pretended that he had not seen it. After a while the food was cooked, Yan Hui announced it to Confucius and brought out the food.

Confucius rose and said, “Just now I dreamed of our late lord (their previous king). Since this food is pure, I will offer some to him.”

Yan Hui replied, “That would not be acceptable. A while ago some charcoal ash fell into the pot. Because it is inauspicious to throw food away, I took it out of the pot and drank it.”

It is not the knowing that is difficult, but the means by which we know others that is difficult. Commonly, we trust our senses and mind, thinking that they are reliable source of information. However, with a subjective discriminating view of things, we may not see the reality. Thus, the Buddha says, “Rely not upon your mind. It is not trustworthy. Guard yourself against the senses, for they surely lead to the path of evil. Your own thought becomes trustworthy only when you have attained Arhat-hood.”

1. Confucius: One of the greatest teacher and philosopher of China.

2. Yan Hui: He is Confucius’ best disciple in learning.